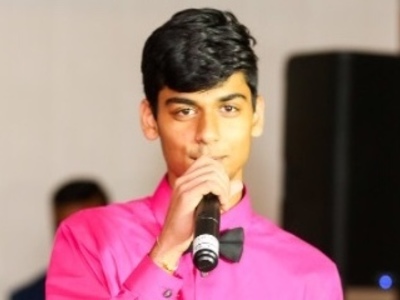 Events
Videos
Summary
Rushil Vishwanathan is an 18 year old aspiring singer, performer, songwriter, producer, and musician. He has experience in Hindustani classical, Bollywood, pop, R&B and choral music so far. Rushil has also performed in a multitude of events across the Northeast, including charity concerts. He is a student at Temple University as a Business major and Music minor. Rushil is looking for more performance and recording opportunities to take his music career to the next level.
y r a m m u s
Skills
Sound recording
I have been working with several softwares such as Garageband and Logic Pro X. I will be using Pro Tools very soon as I plan on minoring in music next semester in college (I attend Temple University in Philadelphia, PA), and Pro Tools is the main DAW they use to teach. As of now, I have the basic knowledge and skill set needed for recording and producing good quality mixes and tracks.
Indian classical vocal
I have been learning Hindustani Classical Vocal for nearly 14 years now and have performed in a number of concerts. I have also begun to include aspects of the Indian Classical style in my other genres of music to create fusion music.
Bollywood vocal
I have been singing and performing Bollywood for over 6 years and have won several competitions in the Bollywood categories. I have also recorded several Bollywood covers and an original song Bollywood song with over 5,000 views on YouTube
Piano
I learned keyboard for about a year from a local teacher. Soon after, I translated my skills learned over that year to the piano and have continued to grow my skills in both keyboard and piano over the last 3 years. I usually play the piano/keyboard to accompany my own vocal performances.
Pop
I have been involved in pop music for about 5 years now. I love the contemporary and "catchy aspects" of pop music, something that I strive to include in my own. I have recorded, performed, and arranged numerous pop and R&B covers on YouTube and Instagram which can be viewed on my YouTube and Instagram links.
Sound mixing
Along with sound recording, I have learned a lot through my friends, videos online, and my own trial & error with softwares about mixing/mastering. I regularly use and experiment with EQ, compression, limiters, different types of reverbs and delays, and much more. Although I have just scratched the surface of what there is to learn in this field, I am driven to learn more and enhance my skills as I continue to record songs.
Song writing
Over the last year or two, songwriting has become a huge part of my life. I wrote my first song for a show I did at my high school. Inspired after that event, I wrote, composed, and recorded my first single, "G.O.D. (Good Old Days)" a few months ago and received a lot of positive response and support on it (G.O.D. can be listened to on all music streaming platforms; the music video is on YouTube channel).
Music arrangement
I got into arranging music in middle school. For A.R. Rahman's famous hit, "Baleilakka", I was part of adding harmonies and enhancing an 1st place-winning arrangement we performed for an annual competition. In high school, with a more extensive knowledge on choral music and arranging, I made my own arrangement of "Can You Feel The Love Tonight" (originally composed by Sir Elton John and renowned for its inclusion in "The Lion King"). We got to perform it at the Spring Concert and the year-end award ceremony. I also recorded it and it can be viewed on my YouTube channel.
s l l i k s
Videos