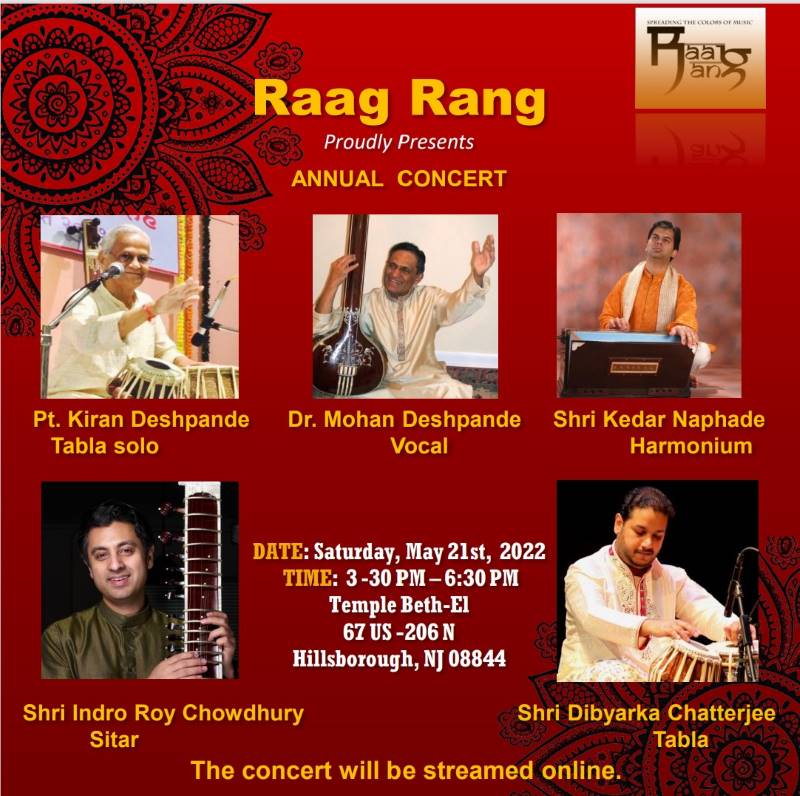 PROGRAM
Introduction by Emcees Aratrika Dey and Shankhadip Chakraborty
SITAR
We will start the evening with a Sitar presentation by Shri Indro Roy Chowdhury. He will be accompanied  by Shri Dibyarka Chatterjee on Tabla.
TABLA SOLO
Our next presentation is a Tabla solo by the very accomplished Pandit Kiran Deshpande.
VOCAL
Our final performance is a Vocal presentation by Dr. Mohan Deshpande accompanied by Pandit Kiran Deshpande on Tabla and Shri Kedar Naphade on harmonium.
About our accomplished musicians
Kiran Deshpande
Pt. Kiran Deshpande was born in the family of musicians and artists on June 28th’1940.  His father noticed his inclination for rhythm at an early age and his uncle introduced him to the world of percussion. His passion for Tabla grew and the first milestone in his journey was the Central Government’s National scholarship to learn Tabla under ‘Tabla Nawaz’ Ustad. Sheikh Dawood Khan Sahib of Hyderabad.
Kiranji has done Masters in English literature and Vocal along with Percussion.  Kiranji is one of the few artists who had the privilege of receiving rigorous training from Dawood Khan Sahib in Delhi Gharana.  An ‘A’ grade artist of All India Radio and Television, Kiranji has performed in all the major conferences in India and all over the world.
He has been teaching Tabla and Vocal since past 40 year and has mentored numerous PhD. Students. Indian Government has awarded Kiranji with Senior National Fellowship for his research on 'Language of Tabla' and his achievements as an artist and academician. His recordings are archived in India’s National Archive for the future generations to benefit from.
Mohan Deshpande
Coming from three generations of musicians in different fields and wings of music, Dr. Mohan Deshpande was a beneficiary of rich and diverse Sangeet sanskaars.
His father and Guru, Mahamahopadhyay Pundit S. B Deshpande worked with a missionary zeal through many roles as musician, performer, celebrated teacher, thinker, author, organizer etc.  Thus, Mohanji’s musical lineage reaches back,  through his father, to his Guruji Pundit Vinayakbua Patwardhan who was a celebrated disciple of the Great Pundit Vishnu Digambar Paluskarji.
Dr. Deshpande grew up in the midst of musical sanskaars, openness and diversity at an early age and was influenced by different styles of music.  He has performed in different cities and conferences in India and the US and is currently conducting music classes in Vivekananda Vidyapith in Wayne NJ for children and adults.

Kedar Naphade
Kedar Naphade is a leading concert Harmonium soloist, accompanist, and educator specializing in Indian Classical, Semi-Classical, Devotional and Folk Music.
Kedar was trained initially by his grandfather Shri Dadasaheb Naphade and Pt. Arvind Gajendragadkar. Subsequently, from the age of 9, Kedar was groomed for over
three decades by none other than Late Pt. Tulsidas Borkar, one of India’s greatest Harmonium maestros. Kedar has also had the privilege of training from Smt.
Padmavati Shaligram-Gokhale (Jan 20, 1920 – July 20, 2014), a legendary singer from the Atrauli-Jaipur gharana (tradition) of North Indian Classical Music.
Over a performance career spanning more than 30 years, Kedar has been featured as a soloist and accompanist at numerous concerts in India, US, Canada and Europe.  He has also performed at numerous devotional and spiritual concerts at Ashrams and events.
Kedar has conducted lectures, demonstrations and masterclasses at several top-notch educational institutions such as the Berklee College of music in Boston.
Indrajit Roy Chowdhury
Indrajit Roy Chowdhury is an exponent of the Rampur Senia Gharana in the venerated lineage of, Pandit Birendra Kishore Roy Chowdhury and Pandit Subroto Roy Chowdhury. Primarily trained in the Veen-Kar style of sitar which draws techniques and idioms of the Veena, Indrajit has been able to carve a niche for himself with his eclecticism and versatility.
Indrajit strives for a fine balance of traditionalism coupled with innovation. Indrajit is based out of New York and maintains a rigorous tour schedule across the continents. As an international artist, Indrajit has performed in a range of distinguished venues, notably: Dover Lane Music Conference, Kolkata, Kennedy Center for the Performing Arts, Washington, The Lincoln Center, New York and others.

Dibyarka Chatterjee
Dibyarka Chatterjee is the son and disciple of Pandit Samir Chatterjee, and as such represents the Farrukhabad Gharana of tabla playing. Dibyarka has had the honor and privilege of performing and touring with some of maestros of Indian Classical Music. He has been teaching tabla extensively in the NY & NJ area for more than a decade now, and is affiliated with many of the institutions that promote Indian Classical Music and Dance.

THANK YOU TO ALL OUR SPONSORS
Our Gold Sponsor 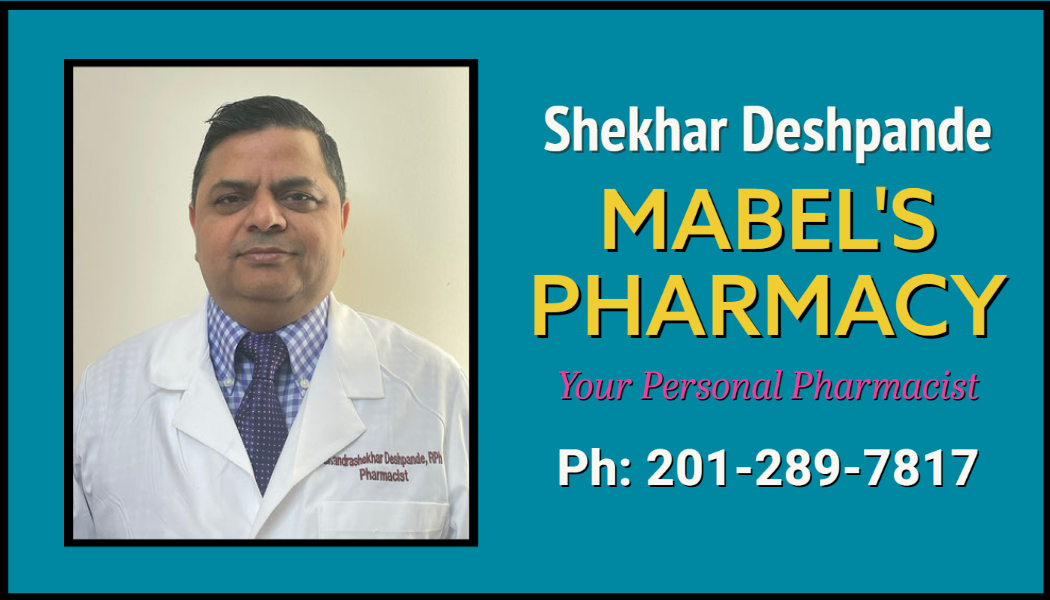 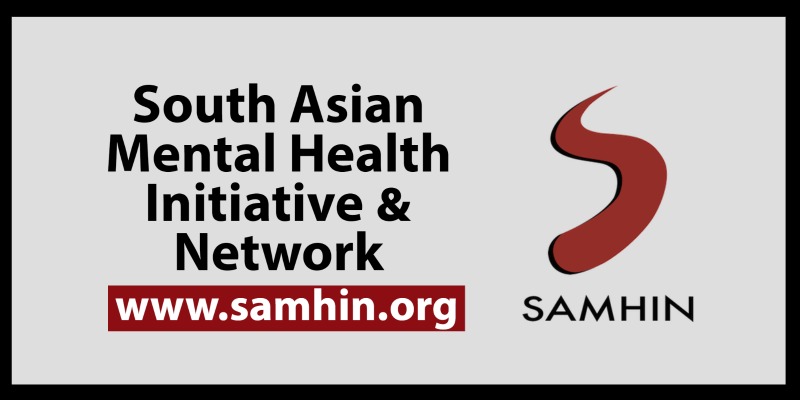 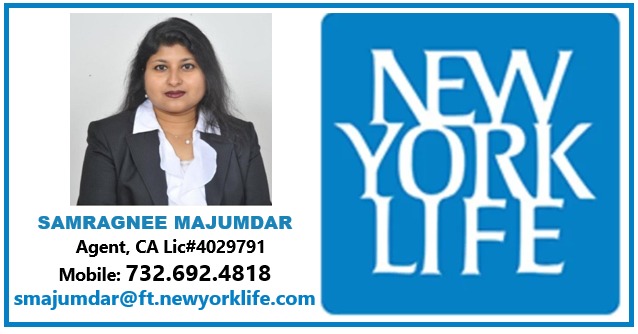